Definition of own balance sheet

The BOE voted unanimously to keep the discount rate at 0.1% and 7-1 to leave government bond purchases at £ 875 billion. While this latest move came less belligerent than we expected (we expected 2 dissent), the pound received a boost as policymakers hinted at a ‘modest tightening’ .

The central bank estimated that inflation would peak at around + 4% in 1Q22, against a previous projection of + 2.5% in 4Q21. The upgrade was driven by recent stronger-than-expected CPI data and reopening effects in services and the pass-through of input costs to consumer goods. 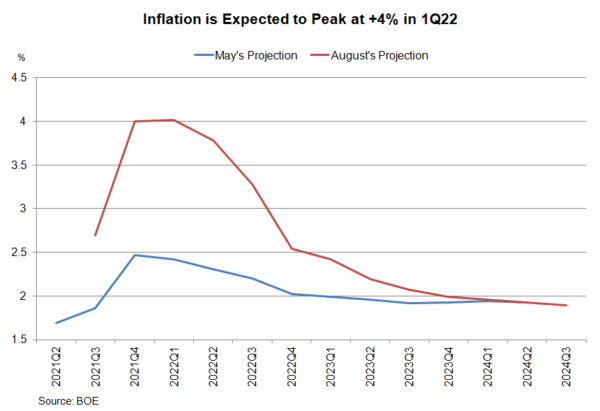 Policymakers have recognized that the continued increase in price pressures reflects “the speed and inequality of the recovery in activity and the disruption of supply chains.” Yet they reiterated that such pressures would be transitory. As stated in the statement, “the current high pressures on global and domestic costs will prove to be transitory. Nonetheless, the economy is likely to experience a period of higher inflation above target in the short term than forecast in the May report. And, along with the temporary supply constraints, the rapid recovery in demand has eroded spare capacity so that the economy is expected to have excess demand margin for a period ”. The committee remained divided on achieving the inflation target of + 2%. Some members suggested that “although considerable progress has been made in fulfilling the conditions of these guidelines, the conditions are not yet fully met, while others felt that“ the conditions of the guidelines have been fully met, but note that the guidelines clearly indicated that these were never more than necessary and not sufficient conditions for a future tightening of monetary policy ”.

A modest tightening is coming

While all monetary policy measures remain unchanged, the central bank has indicated that a “slight tightening” may be needed if the economy continues to improve. As stated in the statement, “if the economy moves broadly in line with the central projections in the August Monetary Policy Report, a slight tightening of monetary policy over the forecast period is likely to be necessary to be consistent with the achievement. sustainable inflation target in the medium term ”.

In its updated monetary policy exit forecast, the BOE would begin to reduce its balance sheet when the key rate hits 0.5% (currently at 0.1%), against a previous forecast of 1.5%. He would also consider actively selling assets once the policy rate hits 1%. The subtle changes signal that the unwinding of the balance sheet could come sooner than expected.

As its balance sheet grows, Lucid hopes to build 20,000 electric vehicles next year

Analysts made a financial statement on the third quarter report of China Telecom Corporation Limited (HKG: 728)